George Wallace had carved several small sculptures in wood in the late 40s, influenced by the work of Barbara Hepworth. These beautifully made ‘objets’ indicate an early interest in three dimensional work, but by the end of the following decade Wallace’s sculpture had taken a radically different direction. 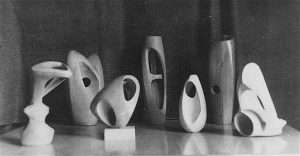 In 1956 he became interested in the metal sculptures of Reg Butler and learned how to weld at the Falmouth Polytechnic. His first steel sculpture made about this time was later transported to Canada and exhibited at the Waddington Gallery in Montreal. The $120 he made from the sale went towards buying a welding torch and regulators which enabled him to start the series of life size welded steel sculptures made between 1959 and 1985.

The following piece is from the introduction to Greg Peters’ Images of Vulnerability, published by Mosaic Press in 1983.

For over two decades, George Wallace has been peopling our landscapes with his creations in bronze and in welded steel. There are now over twenty of these very human figures inhabiting Southern Ontario centres, and a much larger number of comparable prints and drawings in private and public collections. Wallace has brought to Canadian art an urgently needed moral temperament. Everything in his work is either directly or indirectly formed by his concern for the complex fate of man. There is at last an artist in our country forcing us to face the essential questions.

… The art of George Wallace contains no conceptual tricks. He gives us a world without props, cut down to the essential. Throughout, there is a consistent temperament expressing itself in images which are intensely human. Wallace’s art centres on representational compositions. This is particularly relevant, he feels, to his sculpture. Because sculpture is on permanent display, it must assume “a more public image” than the other visual arts. Sculpture occupies space and entails a considerable capital investment, and as such, large sums of money should not be squandered on someone’s personal fantasies. Hence the artist is obliged to make the life-sized image intelligible. Even the actual process of constructing a three dimensional figure draws the sculptor in this direction — “It looks at you while you go on working at it.”.

This all too human quality of George Wallace’s sculpted figures has resulted in some ironic occurrences. When the “Hanging Thief ” was first exhibited at McMaster University’s Wentworth Hall, an alarmed custodian, on his nightly rounds, mistook it for a student suicide victim. Within minutes, the sculpture had attracted an unlikely audience of firemen and police.

But it is not enough to reason that these artistic creations emit such a vital life force simply because they are figurative depictions, for this element emerges from all Wallace’s art, whether prints or sculpture, landscapes or portraits. We must dig deeper. The sculpture and prints repeatedly examine the dilemmas of Christ, Peter, Lazarus and a number of similar victims. There is nothing very pretty about them. Lacking any grace, they are usually small, flabby and hairless. It is difficult to imagine more physically helpless beings. These are the primary inhabitants of a fallen world, where each is a prisoner of the human condition.

As noted, biblical characters and their situations are abundantly represented in Wallace’s sculpture and graphic work. The reason for this is obvious: within its covers, the Bible contains every conceivable human occurrence. From generation to generation, it has provided a collective framework of symbols and images in which the most crucial problems of our existence were scrutinized. And by tapping into this source, the visual artist could unite his art with this structure of ideas.

Modern man, however, has turned away from the Bible. It is becoming a neglected document, as obscure as any ancient mythology, and the result is that a vital chain between man and his art is being severed. In such a situation, art tends to retreat into itself — the imagery becomes too vague and personal. George Wallace counters this increasingly hermetic trend in the arts by placing his biblical figures in dramatic settings which exceed almost any need for reference. One does not require a thorough grasp of the Bible to recognize the suffering written across the faces of many of his portrayals. Painfully resurrected from his state, any of the artist’s representations of Lazarus, for example, could just as easily be a terminally ill patient or prisoner momentarily yanked back into the living world from his cloistered hospital ward where he awaits his death.

From such an artistic foundation a powerful dialogue emanates: images and ideas begin to connect. In part, the impact of Wallace’s art lies in his realization that the dilemmas faced by his mythological and biblical figures are even more crucial now than when they first came into being. Man has not learned by his tragedies (he simply creates bigger and more costly ones), and through the artist’s connecting structures of imagery, we are made aware of these recurring processes within our history.

Contemporary events have inspired the artist to create some of his best works. The Vietnamese War, for instance, supplied the creative spark for the sculpture of the “Legless Man”. Yet Wallace’s art rarely aims at specifics, and the agonized despair expressed by the “Legless Man” cannot be confined to a particular war. Contemporary actions become germinating points for the depiction of a spiritual drama which stretches back to the Bible and beyond. Modern day prisoner portrayals bear an affinity to representations of Lazarus and the dead Christ, beneficiaries of systems of justice are poised in balancing acts comparable to the artist’s arrangement of Adam and Eve in “The Apple Pickers”. Through this process of artistic comparisons, Wallace pulls our particular actions into the timeless arena of unresolved psychological and spiritual situations. We begin to see the accelerating episodes of brutality and suffering in our world, of which we are a part, as the manifestations of an ever growing spiritual crisis.

On this level, a number of Wallace’s works are reminiscent of the great German expressionists from the beginning of our century, and particularly comparable in both temperament and style to the prints and sculpture of Ernst Barlach and Kaethe Kollwitz. Like Wallace, these artists were deeply concerned with suffering. They certainly witnessed their fill, living in a Germany racked by poverty, world wars and the rise of a terribly destructive ideology. On the other hand, George Wallace has spent most of his life in the relatively tranquil environs of the British Isles and Canada: he has experienced none of the actual death and ruin that accompanies war. And probably because of this, Wallace’s art rests upon a much wider base. He points out that, growing up in Southern Ireland, he “had no real picture of war”, and from his position of remoteness from combat, each episode of brutality and devastation that the twentieth century had to offer through the years, affected him on a more internal, moral level. Ingrained within him since infancy, the entire system of justice and conduct — Wallace terms it his “boy scout honour” — was eventually questioned. Wallace’s startling images derive their intensity from his ability to see beyond surfaces to the forces which continue to shape our world.

Through their work, artists such as Rouault, Barlach, Dix and moderns such as Leonard Baskin have made the crisis of our existence the cornerstone for their paintings, prints and sculpture. They have shown us the human consequences of a spiritually empty and fallen world. Isn’t this what we see in Wallace’s depictions of Lazarus? Here is a man who has lived out all the pain and suffering in life, now hauled back to re-live the cruel joke in a body and a soul permanently scarred by death. The parallel with the half dead survivors of Auschwitz and Dachau is too close not to mention. No wonder these images strike us with their human quality.

But this fallen world contains even deeper levels, as surely as the depictions of suffering and death exist beside images of redemption and resurrection. Behind the expressions of George Wallace’s Lazarus, Christ, Peter, his prisoners and other figures, within the earth of St. Austell and Redruth, and even across the map of his own face in the self-portraits, one senses a force at work. A silent mechanism, quite independent of our own desires, is forever present. This sets these images on a remarkable plane, where even the representations of death are transformed by this force. In the art of George Wallace, the dead are never just dead.